In the era we live in, mobile devices have become an indispensable part of our lives. The average time spent using smartphone apps has risen by 30–45% compared to the previous two years. Another data shows that on a global scale, people on average spend more than 4 hours every day on mobile apps.

Since there are countless ways smartphones make our lives easier, the number of mobile apps goes hand in hand with the number of companies invested in the virtual world, which makes our phones small “app shopping centers” where the companies and brands “set up shop” to provide the services we use. However, new challenges emerge as the number of apps that once made life easier increase. Fortunately, these challenges can be overcome by consolidating multiple functions into a new app: in other words, a SuperApp.

Considering every SuperApp around the globe, the most competitive aspect of the market is to build and retain a customer base. This is because fostering a sense of belonging and connection in customer relations is of vital importance in the digital age. The grand competition over customer acquisition and retention, which pushes traditional industries and major players in those industries away from the forefront, requires significant investments as well as deeply constructed strategic efforts.

In this new era where data means power, there is a vast sum of data about every one of us in the virtual world. We are entering an era whose winners will be those who possess the big data regarding our financial status, travels, shopping habits, and many other aspects of life, and those who process this data to make it into something useful. It is time to process data from different areas and collect these in the same platform to bring out new products, new offers, and new business models. Of course, the best way to do this is through SuperApps, where so many functionalities and user habits are brought together.

As is evident from its name, SuperApps are larger mobile apps that encompass scenarios and use cases that may otherwise require many smaller apps. The most notable of these is WeChat, which is used on virtually every mobile phone in China. First released as a messaging application, WeChat stands out as an extensive social network, a means of instant communication, and a method of payment for its customer base of over 1 billion users, which it has built over ten years. On top of these extensive features, it also offers its users the services they need in their daily activities, which makes it the epitome of a SuperApp.

Looking up to the success of WeChat in Asia, many other super apps containing similar experiences have been released one after another. Alipay, Grab, and Gojek are some of the more prominent ones in this category. Today, smartphone users in Asia organize all of their days with super apps.

Different from its Asian counterparts, we now come across SuperApp news and startups focusing on basic financial services in the US and in Europe. 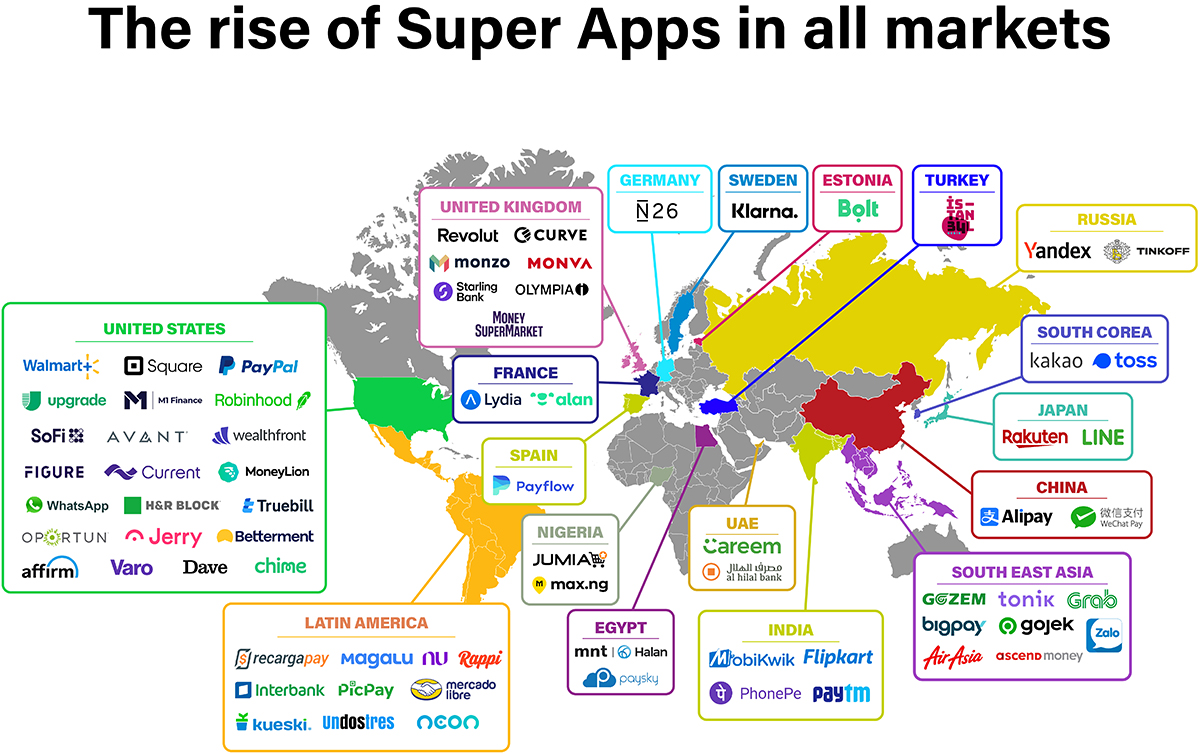 Besides, major companies such as Apple and Google, which are usually referred to as “Big Tech”, are showing interest in SuperApp business models that will bring financial management solutions under one roof.

Due to the rapid development of mobile applications and e-commerce business models that follow a different course from their counterparts around the globe, Turkey is slightly behind on the path to SuperApps. This stems from the fact that possibilities for major players to grow in their respective fields and expand their operations have only recently emerged. And now, the most compelling option left for investors to meet their expectations of growth is a SuperApp. In the upcoming years, everyone should be on the lookout for the intense competition between the brands that will work and innovate to be the first and only choice of the customers.

SuperApp is not just used as a mutual platform to meet industrial players with their customers, but also as a platform that brings the public sector closer to the citizens. In this regard, the best example is the Istanbul Senin (Istanbul is Yours) Super Application that was made public close to the end of last year. Developed by KOBIL, this application brings a new perspective in addition to its Asian and Western counterparts by joining together 16 million people who live in Istanbul.

With a single password, users can access dozens of services such as public transportation and traffic information, shopping, education, culture and art events, filling transportation card balances, accessing municipal services, expressing opinions about the city’s administration, creating private chat groups, seeing and participating in events in the regions close to you, donating to causes, and many others that extend to every aspect of life in the city. The app is sure to attract attention, as it will incorporate new services and the mini-applications included in the SuperApp will expand with every new version.

In summary, SuperApp developments can be regarded as the next big step in the trajectory of the digital world. Thanks to the competition between established players of any industry and the new generation of players of the digital world, super applications will become a rapidly growing business model in a short time. However, the winners will not be the fastest, the biggest, and the most famous brands; but rather, it will be those who can provide the user with a fast, easy, and simple usage in the most secure way.

Super App Use Cases for Banking

Consumer expectations are changing, especially in the banking industry. Learn how super apps allow banks to remain competitive and successful.

The Inevitable Rise of Super Apps

Learn more about the inevitable rise of Super Apps in our blog today, which includes real use case examples from Turkey.

Here’s what your fintech business needs to know about super apps and their benefits to your customers and your bottom line.